from my eyes to my heart

A brand new chapter of my life as Mrs. Chan has made me, joanne khoo, sort of absent. I kind of disappeared but not exactly vanished. I just played wife so comfortably well.

Since tying the knot, Stevie and I progressed from our nomadic lives to happy settlers. Although it took us longer than expected, a year was way too long for a small apartment to be renovated.

I am totally in love with HOME, a spacious abode carefully designed by my talented hubby. Visit us and you shall want a place similar as your own. Big is hospitality but small in maintenance.

Met many strangers and made many of them my best friends and family. We meet everyday on timeline on Twitter, Instagram and Facebook. Occasionally, a drink, a nature hike or an adventure holiday with them. Life is great to be among cheerful company. Even greater when many confided because of the trust we had built over time. Never a stale moment.

Searching for sense in sensibilities, strength in adversity.

Work has also consumed me much. Much, much reorganizing the chaos built over the years’ of hurried growth. I shall endeavor it this time around in a better way.

In the middle of all these God’s grace, there lies a giant H easel stand, brushes, paints and larger canvases prepared by hubby to fulfill my dream to complete my long yearned dream …. my masterpiece.

How can I say no to painting colours into my life again?

reincarnation - lenscape of my mind

It is Qing Ming season.

Noticed this beautiful moth sitting quietly on the kitchen wall.

Warned not to kill or shoo it away, way back when I was even a kid.

I have been made to believe, these moths are our relatives who have passed on.

Do we really come back?

It drizzles endless during the rainy season in spring,
Travelers along the road look gloomy and miserable.
When I ask a shepherd boy where I can find a tavern,
He points at a distant hamlet nestling amidst apricot blossoms.

I want to celebrate life.

To have spent my time and hard-earned money on travel, basic amenities of comfort and a little to spare for emergencies.

Sickness? I have my insurance to deal with it.

Retirement? I don’t know if I could live beyond that. If I do, hopefully I should live long enough to spend all my money inside the Employee Provident Fund.

See no need to get myself a majestic tombstone. Nor a budget columbarium.

Why let people profit from my death?

I have decided and agreed with my siblings to cremate me. No need for storage in a beautiful ceramic urn. Keep it simple and no stress for loved ones.

Toss me into a river.

When I am dead, remember me everyday for the time we had spent together. Remember how I had meant much to have made our lives beautiful. Remember me whenever you miss me.

Travel not a day in a year just to catch glimpses of my past.

When I am dead, let me be gone.

All memories of me stay, everyday in every way!

red dragonfly - lenscape of my mind

whirlpool- lenscqpe of my mind

An ocean of randomness.

At times, they bear recurring patterns.

Most times, they are in a state of their own.

Every time, they are mine.

Each, a landscape of my mind.

I was shocked when walter sent me a DM 2 weeks ago, sharing the news that Karen has cancer. She would be the first friend i know to have it.

On the  1st  day of discovery, a big part of her liver has been attacked. The doctor gave her  6 months to live.

On the  19th day, a biopsy report showed the cancer is spread from her colon upwards to her liver. Immediate chemotherapy and surgery is advised.

She has come open with her cancer. Posting out to friends on her fight and educating us on almost a daily account on her Facebook account. I salute her calmness and collectedness facade, underneath I am sure she has her worries and doubts. Her husband and her 2 beautiful kids.

Advice come pouring in and she is in a deadlock with no answers. The clock is ticking.

I grow up understanding that cancer does not discriminate. To date, she has taken many of my relatives away and spared an aunty.

At 9 years old, I barely knew how deadly cancer was. My first aunty found a lump on my late little cousin, Siew Luan’s thigh. Siew Luan was a fighter, she consoled her mom to be grateful that she only needed to amputate the bad leg. She was happy limping and playing hide and seek with us. She was grateful to be alive. But not for long. soon there were more tumours spreading all over her body. She was blinded when those cancer went up her head.

My third uncle died having throat cancer and 40 years later his daughter, my cousin sister died of womb cancer.

My little nephew died after a kidney transplant and a cousin’s husband passed away last year, 3 month’s after discovering he had throat cancer. He had been smoking for 30 years.

My third aunty was diagnosed with cervical cancer and she survived 19 years on.

Many fought and few survived.

Is Karen going to die?

I pray she is as lucky as my aunty. God bless.

I’d be troubled by how swiftly my precious time ticks away, like an hourglass, barely able to trap a minute. Soon the minutes disappeared, the hours gone.

My thoughts remain the same.

Sadly, this poem was inspired on the day my daughter shared difficult emotions in her adult world. The why’s and what’s.

As her mom, this modern que sera sera song i sang to her.

almost - lenscape of my mind

Hubby bought me many books and I haven’t gotten into an adrenaline mood to scour them for the longest time.

He so laughed at me whenever he teased me about my favourite authors, the likes of Paulo Coelho, Jeffery Archer etc.

Marrying Stevie, transported my literary world into a new shift. I have been introduced to writers that I have known afar but fairly acquainted in any exchange of words. The first book he bought me was Catcher In The Rye by J D Salinger, and he hasn’t stopped at that.

Since I am bedridden with a bad bout of body ache and phlegm; a dirty chance of an infection that leads to a bad flu. I didn’t want to over stress my body, reducing my body’s resistance, I relented when my doctor suggested I take leave from office.

This brightly coloured cover invited me to pick her up. A Haruki Murakami book, entitled “South Of the Border, West of the Sun“. This would be my second Murakami book. Funny of all his titles, I actually started out with ” What I Talked About When I Talked About Running” . Odd that I was not introduced to his earlier writings and some of his more reputable works. I have been told, he is a great writer and every book is an encounter by it’s own. 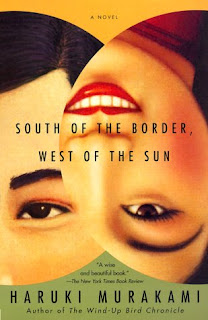 I can relate completely with the story.

Highly introspective. I can see each character, sometimes as myself and many times the people who surrounded my intimate life. I comprehend the emotions of each character and to me, this is a believable story though fiction.

I see no point in me narrating such a well written piece. It is short and easy read, so hard to put it down as Murakami, the storyteller succeeded to coax me to finish this 250 odd pages in a single day. I cried a tear or two. No kidding. I am such a romantic.

In summary, the book enlighten me that all of us have memories. We just have to move forward in lives and be guided or haunted by them. How we deal with each relationship has to do with timing and the big word destiny.

“Hajime, a bar owner in Tokyo, recounts his life since his birth until the recent day he reunited with Shimamoto – his old sweetheart from elementary school, then a polio-stricken cripple. Frustrated at having been separated from her at an early age, he had been in multiple relationships broken by his own desires translated into selfishness. He seemed to finally find a stable married life with Yukiko, daughter of a rich industrialist, who gave him two daughters as well as dad’s backing to open a bar. But now, with Shimamoto standing before him, no longer a cripple but transformed into a raving, alluring beauty, he must face the choice of staying with his current life or throwing it all away to achieve his lifelong dream of real love from the only woman he could trust…

The book describes many moving parts, including growing pains, psychological limitations, parenthood, and most importantly, the importance of both romantic love and sexual relations in the man-woman relationship. I recommend it.”
Sergio Mendoza, Resident Scholar

love - lenscape of my mind

love is a present…..a gift of the heart

love is a presence…a gift of the soul